​Mike will be joining us from Washington, DC, where he teaches Spanish at George Washington University (GWU). “Although I love what I’m doing,” he says, “I am really ready for the new – new hobbies, new friends!”

Mike grew up in the San Francisco Bay area and attended college in Los Angeles. While spending his junior and senior years abroad in Spain, he was hooked on the country and culture. He lived in Spain for 6 years, completing a Masters degree program in Spanish from New York University in Madrid.

Eventually, Mike settled in Washington, DC, working for the Guest Quarters Hotel near the Kennedy Center – it was the first “suite concept” hotel of its kind. Many of the employees spoke Spanish, so Mike’s language abilities proved helpful. The hotel created a human resources position for him, and Mike started the hotel’s HR department. While working there, he earned a Masters degree in human resources management at GWU.

He worked at the hotel for 10 years before moving into HR positions for various nonprofits, including Greenpeace, the World Health Organization (Latin American Division), and several animal rights organizations.

After 30 years of working in the private and nonprofit sectors, Mike decided to return to his first love: the Spanish language. He obtained a second Masters degree in Spanish (a “more modernized version”)” at Catholic University. It was there, as a teaching assistant, that he discovered he really loved teaching. This led to his current position at GWU.

Mike lives in a three-story townhouse in Washington DC, which he shared with his partner. When his partner died a year and a half ago, Mike felt a sense of isolation and loneliness. He realized that although he had good friends in the area, he and his partner had closed themselves off.

Having cared for his partner at the end of his life, Mike is all too aware of the mobility challenges of a three-story house. This is part of what led him to Village Hearth. He first saw the Village Hearth ad in the “Gay and Lesbian Review,” and was intrigued by the drawing of all the different people sitting at a table – it conveyed the message of “being eclectic, welcoming to all,” he said. “And I had a huge revelation – that’s the place I’m supposed to be!”

At a place like VHC, he added, “lack of mobility is not a catastrophe. It takes a little fear out of aging.”
​ 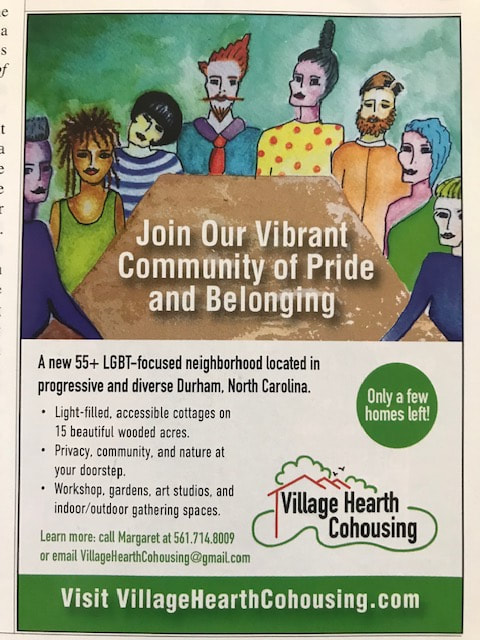 This is the ad in the Gay and Lesbian Review that attracted Mike's attention.
Reflecting on the ad that attracted him, Mike continued, “There are all kinds of folks sitting at our table – gay and straight, male and female. This should be our theme: we’re all going to sit together.”

When he moves to Durham, Mike will be geographically closer to his family. His brother retired to Cary to be near his son (Mike’s nephew), who lives in Apex with his wife and kids. Mike is close to all of them, and is glad they will be nearby.

“I am ready for change,” says Mike. “We’re taking a big step – we’re pioneers, avant-garde!” He looks forward to being a vital part of the VHC community, and to enjoying hobbies like collecting antiques. “And who knows,” he adds, “since Durham is an academic city, I may even consider a part-time job!”